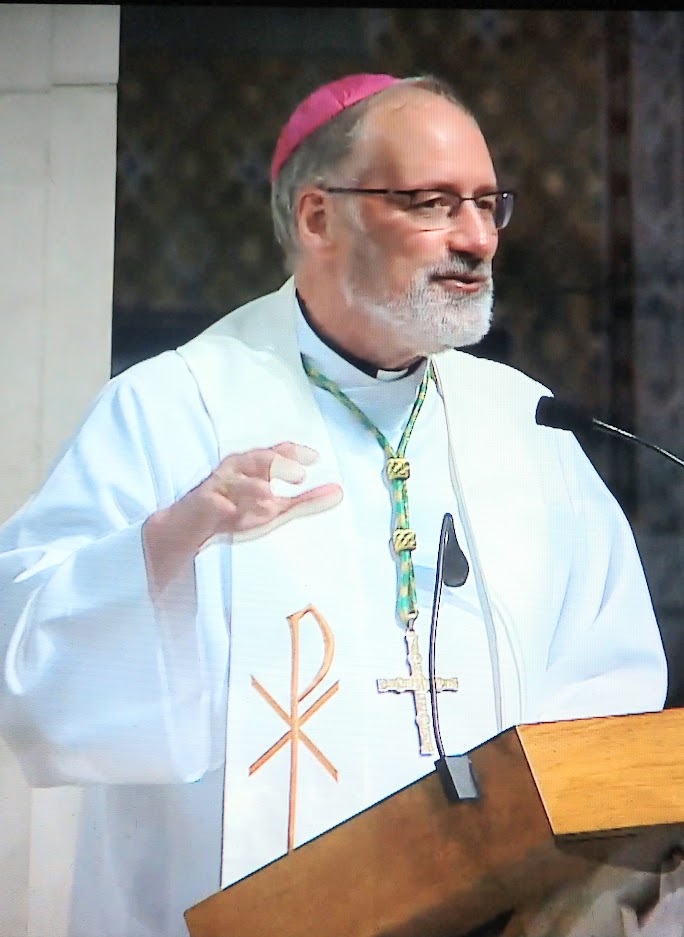 His Grace the Most Reverend Paul-André Durocher was born in Windsor, Ontario on May 28, 1954, the eldest of seven children of Maurice Durocher and Lucille Duplantie.

His family moved to Timmins where he completed his primary and secondary studies in French. He graduated in 1972.

He then attended the University of Western Ontario where he studied music, majoring in vocal performance. He graduated with a Bachelor of Musical Arts in 1977, making the dean’s honour roll and being awarded the Alfred Rosé Memorial Scholarship for vocal performance. He subsequently performed in opera and oratorio productions across the province of Ontario.

In 1977, he enrolled in theological studies at Saint Paul University in Ottawa, earning his Bachelor’s degree in Theology in 1981. He simultaneously completed the requirements for the Bachelor of Education degree at the University of Ottawa in 1980. Throughout these years, he prepared for his ordination to the priesthood which was celebrated on July 2, 1982 in Timmins, in which diocese he was incardinated.

He taught at École secondaire Thériault in Timmins, a French-language public high school, developing programs in values education and music, as well as assisting with pastoral ministry in the school. Simultaneously, he was associate priest at Saint Anthony’s Cathedral Parish and coordinated youth ministry and liturgical formation for the diocese of Timmins.

He was awarded a scholarship by the Canadian Council for Research in the Arts and Humanities to write a master’s thesis entitled “Signe et symbole : l’efficacité sacramentelle dans le champ de la symbolique,” a work that sought to compare various theological efforts to reconcile traditional understanding of the functioning of the sacraments with recent advances in philosophies of language. He completed his Master of Arts (Theology) in 1985.

That year, he was named parish priest of Holy Cross Parish, a bilingual parish in Haileybury, Ontario, where he ministered until 1990. He continued to hold diocesan responsibilities, coordinating various projects in faith education, liturgical formation and youth ministry. He worked actively for the Ontario Bishops’ office of French-language faith education, helping develop programs for religious education in grades 7 and 8. He travelled throughout the province leading professional development days for teachers in the Catholic school system, both French and English.

In 1990, he was assigned to the diocesan team and eventually named Episcopal vicar for pastoral activities and coordinator of chancery services while acting as administrator of various parishes in the Timmins area. He undertook a correspondence program in Canon Law with the University of Strasbourg, France, and completed the civil Licentiate in Canon Law in 1992. He also taught a number of courses in theology for St. Paul University of Ottawa and in religious studies for Laurentian University of Sudbury.

In January 1997, he was named titular bishop of Ausuaga and auxiliary bishop of the Diocese of Sault-Ste-Marie. He was ordained to the episcopacy on March 14, 1997 and thereafter coordinated pastoral services for the French-language sector of the diocese as well as for the native parishes in the Manitoulin-North Shore area.

At that time, as an active member of the Assembly of Catholic Bishops of Ontario, he chaired the its Education Commission and acted as as liaison bishop for its French-language catechetical office, L’office provincial de l’éducation de la foi catholique de l’Ontario (OPECO).

On October 12, 2011, Bishop Durocher was named Archbishop of Gatineau and installed in that capacity on November 30 of that year.

Archbishop Durocher was president of the Canadian Conference of Catholic Bishop, from 2013 to 2015. He had previously been a member of the Executive Committee of the CCCB for six years. He had also served on the Doctrinal Commission and the Commission for Liturgy and Sacraments (French sector). Archbishop Durocher was a delegate of the Canadian Bishops to the Bishops’ Synod on the Eucharist which was held in Rome in October 2005. As president of the conference, he attended the extraordinary Synod on the family in 2013. He was subsequently elected as a national delegate to the ordinary Synod of the family in 2014.

Archbishop Durocher presently serves at the national level as a delegate to the Jewish-Catholic dialogue; he is also a member of the standing committee for reponsible ministry.

In 2014, Pope Francis named him to the Pontifical Council for Culture. In this capacity, he participates in the assembly of the plenaria in Rome every second year.

Archbishop Durocher is often invited to preach retreats and direct workshops in various areas of pastoral ministry. In 2017, Novalis published his three-volume set of introductions to the 150 psalms entitled The Psalms for Our Lives. In 2019, he launched a new book under the title Called by Name, Sent in His Name. Talks on an Outward-bound Church.

He also continues to be involved in music. He was a member of the committee which produced the Canadian edition of a French-language hymnal for the CCCB, D’une même voix. His “Missa Lumen Christi” was chosen as the setting for the closing Mass with Pope John Paul II at World Youth Day in Toronto in 2002. He has recently composed a setting of the Mass inspired by folk traditions of his archdiocese, La messe gatinoise.

Archbishop Paul-André Durocher is the archbishop of Gatineau, Québec, Canada.

Ordained to the priesthood for the diocese of Timmins on July 2, 1982, he taught high school and served in various parishes. He eventually was named Episcopal vicar for pastoral and sacramental affairs and director of the chancery. He completed the civil Licentiate in Canon law with the University of Strasbourg, France, in 1992. During a sabbatical year in 1995–1996, he attended the Pontifical Gregorian University in Rome and completed his ecclesiastical Licentiate in theology.

The following year, he was named titular bishop of Ausuaga and auxiliary bishop of Sault-Ste-Marie, Ontario. Ordained to the episcopacy on March 14, 1997, he was entrusted with the pastoral leadership of the French sector of the diocese and of the native parishes in the Manitoulin-North Shore area.

In 2002, he was named diocesan bishop of Alexandria-Cornwall, Ontario, where he remained for nine years. During that time, he served on the Education Commission of the Assembly of Catholic Bishops of Ontario and was elected to the Executive Committee of the Canadian Conference of Catholic Bishops.

On November 30, 2011, he was installed as the archbishop of Gatineau, Québec.

He served as president of the CCCB from 2013 to 2015. He continues to serve the CCCB as a a delegate to the national Jewish-Catholic dialogue and as a member of the standing committee for responsible ministry.

As a member of the Assembly of Catholic Bishops of Québec, he serves on the Executive Committee as well as on the Council for communities and ministries.

He has been a member of the Pontifical Council for Culture since 2014.

In 2017, Novalis published his three-volume set of introductions to the 150 psalms entitled The Psalms for Our Lives. In 2018, he completed a series of liturgical songs entitled Messe gatinoise. In 2019, he launched a new book under the title Called by Name, Sent in His Name. Talks on an Outward-bound Church.

Come back to visit us!