The Sacrament Of Holy Orders 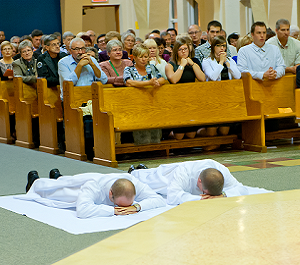 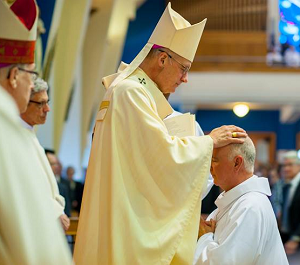 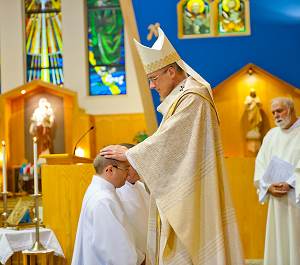 "The order, which unfolds in the three degrees of the episcopate, the presbyterate and the diaconate
is the sacrament that empowers the exercise of the ministry entrusted by the Lord Jesus to his apostles,
to feed his flock, in the power of his Spirit and according to his heart." (Pope Francis)

If there is a structure of responsibility (leadership, one might say) in the Church, it has only one purpose: to allow each member of the faithful to develop all his or her gifts in order to put them at the service of Christ's project. Thus, authority in the Church takes the form of service. And if some people are given authority, it is so that they can free the power of others: the power to take their place, to commit themselves and to serve in their turn.

Jesus chose a group of twelve apostles to be with him. He trained them in a special way. He prayed with them, explained his parables to them, celebrated the Last Supper with them. He entrusted them with the mission of the Church before returning to the Father before his resurrection.

Two thousand years later, men continue to respond to the Lord's call to dedicate their lives to the service of his people.

Priests (who must commit themselves to celibacy, except in the Eastern Catholic Churches) animate the Christian community by presiding at the Eucharist and the other sacraments, ensure the proclamation of the Word through preaching and the organization of catechesis, and see to the good management of the community by bringing out the gifts of all its members. All this they do in collaboration with trained lay men and women, mandated and partners in ecclesial leadership.

Bishops (who must be celibate, even in the Eastern Catholic Churches) preside over the life of the entire diocese, the basic unit of the Catholic Church. They see to its proper organization by setting up the necessary parishes and providing the necessary ministers. They are the primary teachers and liturgists in the diocese. They dedicate their lives to the growth and development of the People of God in the territory entrusted to them, without ever losing sight of the common good of all the men and women who live in that territory. In connection with the Bishop of Rome, the Pope, they share the concern for all the Churches and collaborate as much as possible in the animation of the whole People of God.

If you feel drawn to the diaconate or the priesthood, perhaps it is the Spirit of God in you that is inviting you to follow Christ in one of these particular ministries. Don't hesitate to talk about it with others, especially with the leaders of your own Christian community. And contact our diocesan ordained ministry accompaniment and formation leaders.