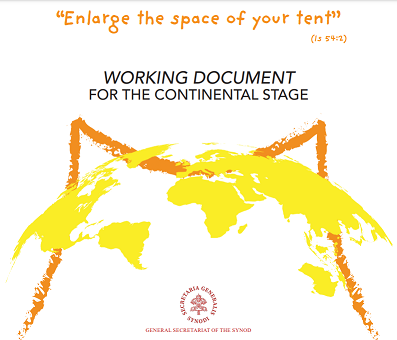 The Continental Stage of the Synod

The Holy See’s General Secretariat of the Synod issued the Document for the Continental Stage (DCS) of the 2021-2024 Synod: For a Synodal Church: Communion, Participation, and Mission. The DCS is the result of the discernment of 112 contributions from episcopal conferences, including the Canadian Conference of Catholic Bishops (CCCB), as well as contributions from Eastern Catholic Churches, religious congregations, ecclesial associations and movements, the Vatican dicasteries, and individual contributions submitted to the General Secretariat of the Synod.

Bishop Raymond Poisson, CCCB President and member of the writing team for the Canadian National Synthesis, has noted that the DCS “invites us to continue to meet, discuss and question, in a spiritual and prayerful context, in order to bring our Church to where the Spirit is leading it. We have all experienced that this ‘walking together as Church’ does not end; but it does have a goal: to create a space for the mission of every baptized person.”

The Continental Stage of the Synod will see a continuation of the process of listening and discernment rooted in the DCS, in which the CCCB and USCCB will hold 10 virtual Continental Assemblies, in English, French, and Spanish, in late 2022 and early 2023. The Continental Synthesis from Canada and the U.S. will be drafted in February 2023 and submitted to the Secretariat of the Synod by March 31, 2023.

Begun in October 2021, the “Synod on Synodality” was recently extended by Pope Francis through October 2024, to allow for more time for enhanced discernment from both the members of the Synodal Assembly as well as the People of God. The Universal Phase of the Synod will be held in two parts, the first in October 2023 and the second a year later in October 2024.

The Document for the Continental Stage is available here.